Living your absolute best life sounds awesome, but in the fine print, you’ll find that actually doing it takes some real grit. If you need a bit of a hand building up your moxie, take advice straight from your favorite celebrities already enjoying the spotlight.

“If you were to ask me what I want to do – I don’t want to be a celebrity, I want to make a difference.”

Sure, being able to bask next to Bradley Cooper ain’t a bad gig, but Gaga gets that having a bigger sense of purpose and meaning for your life wins out even over fame. You get that from initiating change in the world, even if that change is as simple as encouraging someone on the subway. Never settle for simply maintaining the way things are.

No one who ever got anywhere did so without flaws. It’s OK to not know answers and even to fall on your face. The important thing is just that you keep trying, and that you go into the next round a little wiser for the wear.

“Doing the best at this moment puts you in the best place for the next moment.”

Success has nothing to do with being perfect. It has to do with giving your absolute tops on any given day, and understanding that reaching the top is a long series of small steps, each of which prepares you for the next. As long as you are applying everything you’ve got for this moment, you’re laying an envy-worthy foundation that sets you up to win.

“If being sane is thinking there’s something wrong with being different…I’d rather be completely f–king mental.”

You know the drill. You have a great idea or want to take a risk. Then you nix it because, well, what would so-and-so think? And the group apparently is life. But the irony is that real friends, real connections, happen when you can let go and just be you. And let’s face it. The individuals that people remember are the ones who don’t do it the way it’s always been done. So take a chance. Be weird. All the greatest people are.

“When you walk up to opportunity’s door, don’t knock on it. Kick that b–ch in, smile and introduce yourself.”

The lesson here isn’t don’t be polite. It’s that there’s no reason to be timid or think you aren’t qualified when you move toward a possibility. You have skills, talents, and ideas, and you deserve a real shot as much as the next person does. So find what you want. Then be aggressive and take whatever reasonable, ethical steps necessary to make sure others take you seriously. After all, there’s nothing sexier or more effective at getting people to follow you than self-confidence. 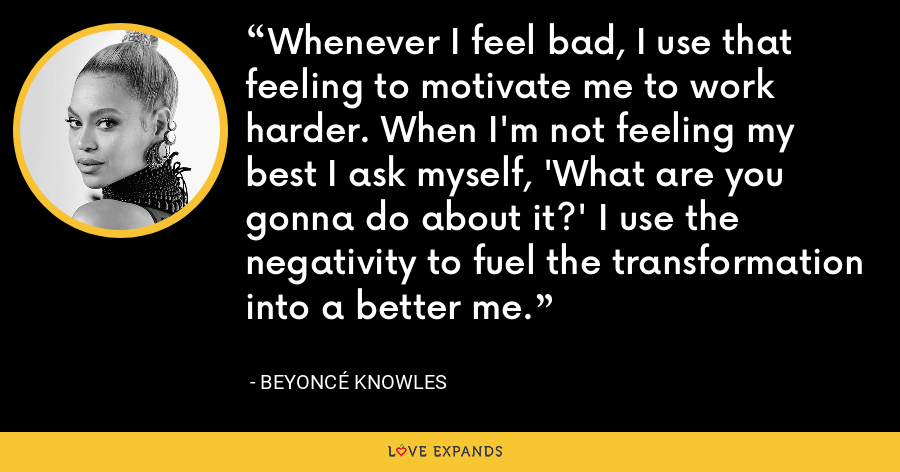 “Whenever I feel bad, I use that feeling to motivate me to work harder. When I’m not feeling my best, I ask myself, ‘What are you gonna do about it?’ I use the negativity to fuel the transformation into a better me.”

You might not have chosen to be in the circumstances you’re in. But Queen Bey’s point is that you do have a choice in how you react to those circumstances and that you can be accountable to yourself and others. You–not Aunt Gizmo, not your BFF, not your boss or the drama queen down the street–can take initiative to do something different. Don’t let anyone else pick the direction for you.

“No matter who you are, no matter what you did, no matter where you’ve come from, you can always change, become a better version of yourself.”

One of the most common reasons people don’t go after their dreams is that they’re too wrapped up in the doubt, guilt, shame and embarrassment of the past. But there’s no magic rule that says you’re stuck and everyone else isn’t. Everyone makes mistakes. Everyone can learn. It’s just a matter of committing to the person you want to be.

“Keep your eyes on the finish line and not on the turmoil around you.”

When you look only at the mess and chaos in your life, it’s easy to feel overwhelmed, freak out and want to quit. But if your focus on the prize, on where you’re going, stress stays much more controllable. Concentrate on what you have to do one level at a time and don’t let yourself get distracted.

“Being realistic is the most commonly traveled road to mediocrity.”

“You don’t try to build a wall, you don’t set out to build a wall. You don’t say I’m gonna build the biggest, baddest wall that’s ever been built. You say, I’m gonna lay this brick, as perfectly as a brick can be laid, and you do that every single day, and soon you have a wall. It’s difficult to take the first step when you look how big the task is. The task is never huge to me, it’s always one brick.”

This doesn’t mean you don’t face the way life actually is. It just means that, if you really want to achieve something, you’ll be fierce enough to say f*** the rules, start from scratch and venture into new ways of thinking and doing. Trade “impossible” for “hasn’t been done yet” and then look at what you want from every angle you can.

When it comes to big targets, slow and steady really does win the race. The key is to surround yourself with as many people who can support you over the long haul as possible. If you do that and find ways to keep looking at the work with fresh eyes each day, you’ll stay motivated to the finish. Look for progress–any progress–and focus on that rather than how much time you’ve got or overall huge scope of what you’re doing.

“I will not let anyone scare me out of my full potential.”

Real fact: people get mentally messed up when they see others achieve. It makes them feel like they’re playing Pluto to your Jupiter. So how do they kick-back? They try to intimidate you or to convince you to opt-out. And let’s not forget social pressure, too. People can get messages based on their culture that they should step back and not fight, or that they’re stepping on toes or don’t have privilege somehow. But either way, the real path to stardom is unwavering confidence. Or as Katy Perry puts it, “If you’re presenting yourself with confidence, you can pull off pretty much anything.”

Your confidence isn’t always going to be roaring like a lion. That’s normal. But on days you do need a boost, let any of these quotes get you back in the game.

I don't ask for the sights in front of me to change, only the depth of my seeing.

When you live with constant gratitude, your life will become a living prayer.

Love is the only sane and satisfactory answer to the problem of human existence.

The most worth-while thing is to try to put happiness into the lives of others.

An injury is much sooner forgotten than an insult.