It’s no secret that Armenians generally have a strong desire to marry someone from their own background. So despite their relatively small population, especially outside of Armenia, Armenians have flocked to one dating site in particular and made it a very popular destination to meet, chat, and date Armenian singles. Topping our list of Best Armenian Dating Sites and Apps is none other than the very popular HyeSingles. 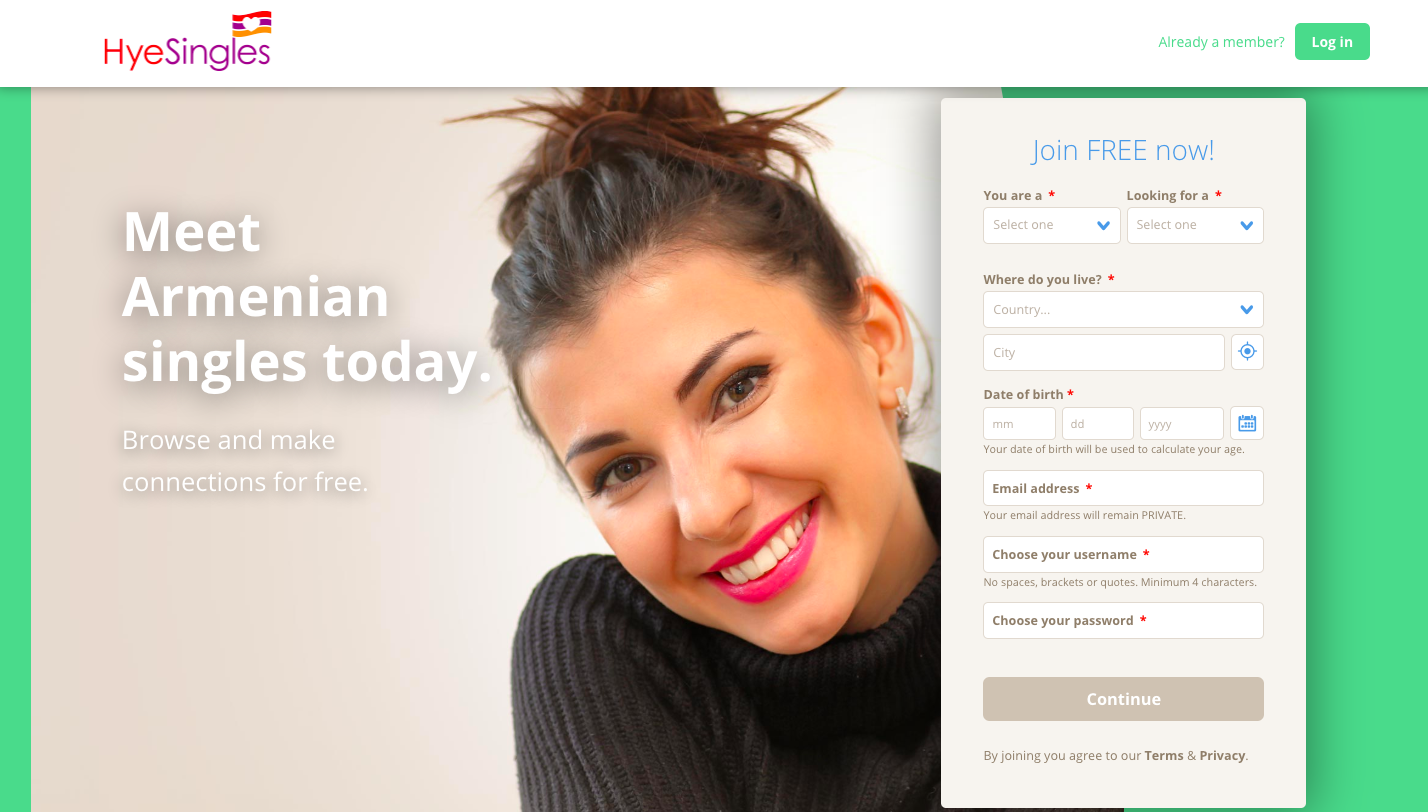 HyeSingles is a really vibrant Armenian dating site. The site is geared towards the Armenian diaspora, although by virtue of being available in several languages (English, French, Armenian), it does have members from Armenia as well. The membership is diverse as you will see from the many men and women who identify as either Beirutsi, Parskahye, Hayastanci and so on.

The site is free to join and many of the features are free as well, but in order to get the most out Hye Singles, you will need to upgrade to a Platinum Membership. Unlike swiping sites, HyeSingles places an emphasis on the quality of profiles and as such, is geared towards more serious-minded singles who wish to go on dates and find a long-term partner (vs swiping for hours on end).

HyeSingles offers robust search filters that will help you narrow your search and real-time chat which makes it easy to quickly connect with members. Also, the site’s informative profiles provide you with a level of reassurance when speaking to members. The site and their newly launched app are ideal if looking to meet Armenian singles in Los Angeles, Armenia, and other locations across the US, UK, and Canada.

While we were underwhelmed with the number of poorly designed or inactive Armenian dating sites (hence why this list is limited to just one site) we found Hye Singles to be an Armenian powerhouse for meeting single Armenian men and women.

Click here to join HyeSingles and best of luck in your search for finding your Armenian match!

The most popular and longest-running dating service for Armenians worldwide. Meet both Armenian singles living abroad (Diaspora) or Armenians living in Armenia but who are interested in meeting a match outside of the country. Both the website and app are available in several languages. Click here to join Hye Singles!

Available as a website and apps in the Google Play and Apple Stores, this service is also a popular service for single Armenians looking to date.

A free Armenian dating app that lets you meet cool new people around you. You can Swipe Right to like or Swipe Left to pass that person.

Barev is an Armenian dating service for serious relationships.

Since 2005 Armenian Passion has been a leading Armenian dating site connecting the Armenian singles and Community to each other for friendship, marriage, and love

Armroom is a quasi-dating, social networking site for Armenian singles. While it’s not the best on our list, you will nonetheless find a good number of Armenians on the site.

Membership on ArmRoom starts at $9.95 for one month and goes up to $29.05 for 6 months. The service is also available in the app store. Click here to check it out.

Little Armenia is another Armenian dating site that you may want to join. Like Hye Singles and ArmRoom, it a subscription will be needed to unlock all the best site features like chat and so on. While it does not have an app, you may want to check it out online.

Hye Dating rounds out our list of Best Armenian Dating Sites. The layout is certainly outdated, and while we did not register, the site might be free of charge and hey, they have a very good domain name (HyeDating.com). Update 2022: this site is no longer available

Kuku is a free Armenian dating app similar to Tinder that lets you meet single Armenian ladies and men near you. You can Swipe Right to like or Swipe Left to pass that person. If you feel that you are falling in love, then swipe up. If they also Swipe Right, It’s a Match!

Barev is an Armenian dating app available on iOS and the Google Play Store. The company appears to be based in Eastern Europe and is available in several languages.

Below are the best communities outside of Armenia for single Armenian women and men looking to date someone who is of Armenian descent.

Los Angeles, California: Los Angeles is a sprawling city that happens to be home to a very large Armenian community. Some estimates have the Armenian population in Lost Angeles at over 300,000! Glendale, or Little Armenia as it’s known, has the largest concentration of Armenians and as such, is a great place to meet and date single Armenian ladies and men

Paris and Marseille, France: These two beautiful cities are said to host some 150,000 Armenians.

Beirut, Lebanon: Speaking of beautiful cities (and people), Beirutsis total around 80,000 according to Wikipedia.

New York City area and Boston, Massachusetts: These two large US cities are said to be home to over 80,000 Armenians. Of the two, the New York area appears to have a slightly larger Armenian population than Boston.